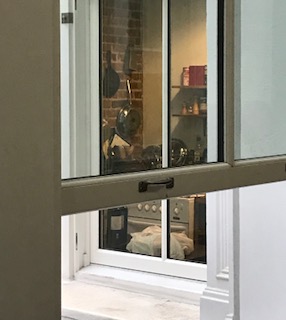 Yesterday I walked 60 blocks down 5th avenue, through a blue haze of 90 degree heat, with tall hot buildings closing in on me, to SoHo where there was a memorial for our friend Marcia Hafif who had died just short of 90 in California a few weeks ago. Mary and I had heard about it while we were at a preview of a new Film about Picasso starting Antonio Banderas which I did not want to go to, but was overruled,  so we walked the red carpet and took our seats with the dispiriting news that there was be a “Q and A” with the famous actor after the screening. But before the lights went down Mary checked her Instagram feed and learnt that Marcia had left us and so to honor her free spirit, and because we were hungry and sad, we conspicuously got up and left just before he took the stage.

There can be no greater opposites than Picasso and Marcia Hafif. Watching this poorly executed drama about the most diverse, undisciplined and unchained genius was an extraordinary backdrop for us as we thought about Marcia and her life and practice over the next hour or so in that dark theater. Marcia was predominantly a minimalist painter and this is what she will be known for despite the fact that her work was rich and varied involving writing, photography and (more on this later) video. Its main characteristic is its discipline and I get scolded every time I say that she made the same piece of work over and over, it’s not meant as an insult but it’s said in wonderment; my point being that it’s critical to look at it with a wide lens and see it as an entire body of work.

The last night we spent with Marcia was in her home on Laguna beach, where she had been regularly migrating to, in late November last year. It was a midcentury space that she had furnished minimally, with painted plywood floors, a plain white sofa and an Eames coffee table, typically, it was just empty enough. And it had been a terrible year mainly because of the toxic Trump poisoning the country right from the start, but much worse, Marcia had changed and was now extremely frail, she was always as thin as sandpiper, and walked slowly as if she was wading through shallow waters but we had optimistically brought her Cheese and Wine and the promise of a dinner but unfortunately she was too fearful to go down the steep steps to our car.

She was still incredibly aware; her bird like eye’s and intelligence were still as precise as ever. It was with pride and a new vulnerability she showed us how to access the web site of the museum in Switzerland where her show was currently up and walked us through the show with a 3D tool that mimics the experience. Seeing a group of her work in one place tells her story. Each painting is in conversation with the next and the space around it, each pocket of natural or artificial light was carefully considered to understand its impact. A significant group of paintings with a different gradation of grey is an optical challenge and the closest I can think of as the spiritual side of her nature, and has a similar impact as a Rothko room, such is the overwhelming density of the experience when seen in situ.

At the memorial, an event in Marcia New York loft. Which was mainly populated by Octogenarians, predictably we were asked to share a few thoughts on Marcia and this was kicked off by Joan Jonas who talked about this spiritual side and “moving forward” which was enhanced by an unsettling lateral motion of her body, others made the similar observations and I started to feel a little uncomfortable as if I’d gone to the wrong memorial. In one sense I knew I was at Marcia’s because of the loft which hadn’t changed since we had for visited it over the last 20 years or so. The tiny kitchen had the same perfectly cleaned pots and pans and the same pasta boxes on rude plywood shelves. Stacks of her paintings in bubble wrap were titled and categorized in rough pine shelves, others were turned facing the wall to remind us of our loss and also perhaps a hint about privacy and discretion. There were other well-known artists around this table other than Joan Jonas; Dorothea Rockburne, Jackie Winsor, Mary Obering mostly all small in person but with a big presence and stature in this world. It took Mary to talk about her written work, and a time when this was shown in Chelsea, for the tone to lighten a little and for gentle laughter to bounce up onto the tin ceiling and circulate through the corners and nooks of the space and lifting momentarily some of the melancholy, a reminder that a good remembrance is a celebratory experience.

I was glad that she did this because I was feeling that we were missing the core of Marcia a little, her spirituality, her discipline and her calmness were her Japanese qualities, but the side I loved most was the wicked one, and Mary had hinted at that in her talk. Marcia was razor sharp and I lived for her put downs…”r-e-a-l-l-y Neil?” she was say at my comment, turning to me with her full attention, her intellectual school mistress stare, while I braced for the challenge. At first it was intimidating but then I learnt of the humor, kindness and even sexiness behind those eyes, the edge of her lips rising gentle as if she was suppressing laughter and a shared love of irony it became our way of communicating. This was the punk side that Mary and I cherished and I don’t know for sure, but my guess was that there was not so much unrestrained laughter in Marcia’s professional life, it was known that she was a very serious artist, but it happened with predictable spontaneity when we were around and, it may sound conceited, but we felt she was admitting us into her private world.

When Mary first had her gallery in the mid-1990’s Marcia presented a work that consisted off a red painting and a blank TV screen just showing a deep blue color, no narrative or sound. At that time I was a skeptic (and an angry one) because on Saturdays, my day off, I was on gallery duty being nice to critics, and artists, and even sometimes collectors who had made the pilgrimage down two flights of steep wooden steps to the basement space.  In that quiet time I had the red painting to myself and my admiration gradually increased, standing inches from the surface I could see the tight brush strokes were rough, as if made by a cats tongue, and applied with extraordinary skill and precision. These created a undulating surface and those variances caught the light and retained it producing a deepness and intensity to the color which was arresting.

On reflection, it was not a good idea for it to be in a group show, that crimson square which stole the light from the room and kept it all for itself, it was a dominating presence that seemed even to pulsate at times and made all the other work around it seem ephemeral. Each generation tries to re-invent monochrome painting and how you feel about that involves the larger question of how tolerant you are about young people in general.

All during the preceding week of the show, Mary had been on the phone like any good dealer, talking to museums and collectors and critics. One of the stranger responses came for an important museum, unexpectedly from the video art department, who said they would come and visit on Saturday.

The day of the visit had begun with indecision, first there had been unambitious waves of rain tapping on the large windows, and then a few hours later a warm circle of light appeared on the honey colored floor of our loft indicating sunshine but this also seemed to lack will so we settled for a soft uncertain day, one with a scent of sadness. I was alone when the commotion of children, two large buggies and a pair very hot, serious and angry women were heard coming down the steps. Once they had arrived, four children and two curators stood panting and vexed. Asking me where the Marcia piece was, I pointed at the red painting and the blue television screen and after a few minutes one turned to me and said “you can turn it on now”. Explaining that this is the piece, she had a transformation and an inner fury was evident on her face and the temperature in the room went up considerably. Looked again at the painting, then the TV with its empty blue screen and then theatrically to me, it was a Bermuda triangle of contempt and I felt I just needed to step inside this negative energy field to mysteriously disappear forever. Was it a joke? were they being laughed at? And where were the architect’s of this comitragic moment? Mary was not here to explain it and Marcia was a challenging, fearless and innovative artist.

I had the sense that we all wanted to claim a little of Marcia at this memorial for ourselves, to compete a little in our level of friendship and that was fine as there was a lot of her to go around, she was a complex person. If Mary and I had to take something of Marcia, it would be the punk side, the twinkle in the eye, the flirtatious and anti-establishment one, others can claim the spiritual friend, for us it’s the spontaneous laughter and naughtiness which we will treasure.