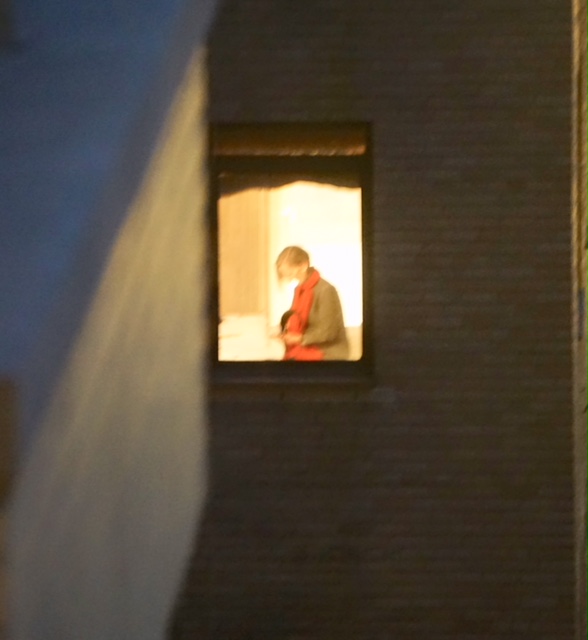 If you Google “New Mexico Artists” you may not be surprised to see Georgia O’Keeffe dominating your screen. I anticipated a host of unheard of landscape artists from the turn of the century but mainly I had hoped to see Agnes Martin and Bruce Nauman, but that required a little more searching, and like everything in that unreliable labyrinth it also turned up a few surprise art residents such as Richard Tuttle and Judy Chicago. In my own narrow view, O’Keeffe, Martin and Nauman are the three most interesting because of the vast disparity in output and practice. Despite the differences in their work they have a common characteristic (other than working in New Mexico) in that they seem to have materialized out of nowhere with few obvious influences, authentic pioneers, and who at least carry the some of the spirit of the explorers and cowboys in this wild empty landscape.

I was trying to find at least one single year when all three had worked together in physical proximity but the O’Keeffe years were 1949 to her death in 1986, Martin from 1967 to her’s in 2004 and Nauman moved from California in 1989 and lives there to this day. So that potentially neat device failed to materialize by just three years. I had been thinking about the vast differences between them, with O’Keeffe’s s modernism, Martins minimalism and Nauman’s conceptualism, coexisting and relevant in significantly different ways and at the same time.

O’Keeffe famously arrived in New Mexico after a career in New York when she was closely associated with the influential photographer and Gallerist Alfred Stieglitz. She made beloved paintings of the City and was known as being part of the America Modernist movement, a term that a century later seems increasingly slippery and difficult to define. Once in New Mexico she turned to the nature and landscape around her and defined what new American art could look like.

Both those who know very little about art and those who know a tremendous amount about it hold her in high esteem. A colleague who can count the number of artists she knows on one hand visits the Gallery in Santa Fe regularly and has built vacations around O’Keeffe. Art critics and historians I know talk about her reverentially and I feel pressured to do the same, but I confess I have never been deeply drawn into her world, for me there is a vein of sentimentality and artifice running through her paintings that I cannot warm to despite my best efforts. However it’s possible to respect and admire art without actually liking it.

The trip to Abiquiu to visit her house, gardens and studio is a must and a greater understanding of her work can be reached simply from the view from her living room window. There is what real estate agents used to call a “picture window” which has never been so true in this case. The guide likes to take the group to the garden and show a slight bend in a road which is featured in one of her most minimal works, it’s a slight gesture, just a single band of paint representing a road; as simple as an Ellsworth Kelly, a brave work risking ridicule but pulled off with bravado. And the date amazes as does the looseness of the brush strokes and the simplicity of the form, predicting minimalism. The living room itself had some surprising mid-century modernism, a Saarinen womb chair, a Mies Van Der Rohe coffee table both of which still look contemporary today and counterbalance the small kitchen with its dated appliances.

The O’Keefe museum in Santa Fe when I visited was packed to such an extent that I found myself sulking in an unpopulated section displaying bespoke frames. There was one by John Marin that was absorbing because of its femininity, lascivious curves hinting at a hip or the underside of a breast, in black steel. It made me consider her work again and why I had so much trouble with it: was it a fear that there is some misogyny on my part? Was it the obvious challenge to place her work within a comforting art historical context? or worse, is it a benign snobbishness, a reaction to her broad accessibility? It would either take a complete fool or a seriously accomplished critic to make a case against O’Keeffe and although I’m not quite in the first category, I am certainly nowhere near the second, but that doesn’t mean I’m prohibited to ask why I have ambivalence towards her work. Sometimes the most interesting artists are the one you don’t like while at the same time knowing they are important for reasons you cannot quite grasp.

It is also my nagging doubt of whether it is the cult around the artist herself, the nude in a Stieglitz photograph, her mix of independence and femininity well before its time, her chicness and the stern iconic photographs of her dressed in black, driving a modified Model T Ford and then a white Mercedes and the Ghost ranch all contributes to the myth, meaning and importance we imprint on her paintings like an added layer of varnish. Popularity is a curse for some artists no matter how brilliant they are and now in our overly commercialized world the formula seems to be that avant-garde + time = coffee mugs and calendars, which is at least part of her destiny.

Everyone has their own way of looking at artist work and mine is basic; I search both for their influences and then for the coded conversations they are having with their contemporaries. The risk is an unreliably superficial placement in a category or movement which can end up being overly simplistic. But I feel I need to understand the vision of an artist as if it was a simple recipe (take one large Beuys, add a touch of Richter, mix with a sprinkling of Koon’s) and the outcome of this circumspect parlor game is that the more challenging it is to play, the more original the artist. And in the case of O’Keeffe it is so difficult to place her in a box; she was wildly original and independent beholden to no obvious influence or contemporary.

That is also the case for Agnes Martin, a determined and independent figure, who eventually washed up in New Mexico. Like O’Keeffe she was a New York transplant who left after buying a pick-up truck and driving alone overland. She build an adobe building herself in the middle of nowhere before moving to Taos where she eventually died and her ashes were scattered in a midnight act of defiance by her friends in the grounds of the museum where some of her latter works are still shown.

She was disciplined and single minded, a lesbian, someone with occasional mental problems and who fought fiercely to protect her legacy. Like O’Keefe she guided us through her work more by telling us what it is not about, the paintings should come with a government warning like the drug commercials we see on TV. Do not read into them anything about her or her surroundings instead think of them in an Eastern Zen way, just pure, joyous and luminous objects without deeper meaning. The most famous works are tightly drawn grids in pencils often on a neutral pale background and are as formal as a stock brokers suit. But her work is a play in two acts, the New York years where she painted those famous grids and the second New Mexico works which are pale, sublime stripes which to my untrained eye look very much like the colors of the landscape; which I say at risk of getting my wrist slapped. You can see some of these in a room in the Museum in Taos and it’s impossible not to think of the gentleness of this work, such a contradiction to the chain saw wielding and adobe brick making woman who would wear the clothes and attitude of a builder.

Bruce Nauman is an art’s-artist and speaks to anyone who has ever spent time alone in a studio anxiously contemplating their next step forward. His work is that of ideas, often hatched through these internal moments where he has no choice but to examine his own body and his own tight surroundings inside the walls of his studio, a self-imposed prison. The outcome is that his methodology became wide ranging and far ahead of its time; neon, video, sculptures, drawings, sound pieces in fact almost anything with the exception of painting, the result of long journeys into his own imagination and within the confines of his studio. In 1986 he had a show in London’s Whitechapel gallery and few years later almost every art student was making art which was a greater or lesser degree versions of what they had seen. Some even made the uneasy compliment of making almost direct copies and several were part of a group that eventually became known as the YBA’s (Young British Artists) but could equally have been Young Bruce Alumni’s.

A few weeks ago on a dull, wet Sunday we went in the DIA Beacon space and saw again several early pieces which were recently shown again in public. These works are hard to live with and really needed the vast warehouse like space to house them. Even then it was difficult engage, they ask so much of an audience, to physically confront fears and emotionally to navigate the interpersonal dramas. The most rewarding work was one of his most recent, the 2001 work “Mapping the Studio” a six hour investigation by night vision cameras of the cats and mice in his studio. I like the work mainly because it is one of the few that does not draw you into the claustrophobic video installations some of which are to be viewed at the end of long narrow corridors, making you an unwilling participant with no easy way to escape. Instead it allows you the luxury of being able to walk at your leisure and the time to contemplate the messy studio while you wait endlessly for the movement of one the animals that are the central actors.

His work has nothing, and everything, to do with the landscape. Deeply psychological, exploring the relationship between the artist, his audience and the outside world, the tight and neurotic nature of the work must make it essential for him to step outside the confines of his work space and breath in the huge New Mexican sky.