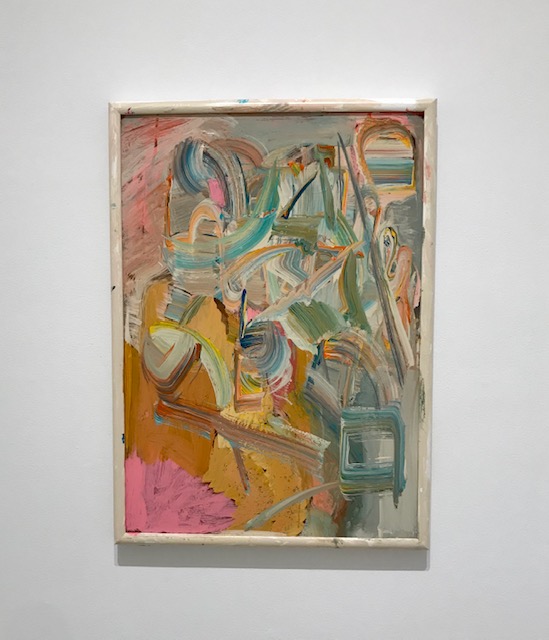 Two exhibitions opened late last week in New York which on the surface have little or no connection other than illustrating the broad spectrum in both medium and intent that currently resides and is celebrated in the Contemporary art world. On one side there is the midcareer work of the abstract painter Katy Moran whose gorgeous, energetic paintings has given her, and a handful of her associates, the thankless burden of being the great hope of this slightly tired genre. On the other side there is the now famous Cuban America Artist Jorge Pardo, who has successfully been walking a perilous tightrope straddling art and design, at the risk of satisfying neither camp. This show covers a formative period in his development, between 1988 and 1994 when he was in his mid-twenties to his early thirties and under the quiet, yet perhaps insidious, spell of the intellectuals of the Los Angeles art world.

Katy Moran’s work has been a familiar fixture of the art work for about twenty years or so, and she has been collected by the high and low, from top Art institutions to pop stars and celebrities who venture from their world into this one from time to time. It is hard to put a finger on what sets this abstract painter apart from the thousand others who take a small canvass, a set of paints and tries to make something fresh, of and for them-selves, to tell a story without the convenience of a figurative narrative. She has a restless brush and a lovely gift of color, frequently using a cool palette which gives the work a sense of timelessness; these paintings we think to ourselves might have been realized at any time in the last hundred years. To add to this feeling in this show she has used old, found picture frames, which create a notion that they were not recently painted. This is not a new device, in the past there have also been elements of collage which offered the illusion of layered time.

Perhaps because of the inclusion of these old frames, some of which were painted over, we think of the influence of Howard Hodgkin, another strictly nonfigurative painter who was unafraid of slyly adding figurative hints and who, like Moran, painted exclusively feelings and memories. He attacked his canvasses with broad luscious strokes and powerful emotions whereas Moran is largely on the other spectrum, with busy tight movements and an introvert’s intensity. At the show’s opening I was struck by the sense that these could have been studies by the War time British Artist Paul Nash and when I had a brief opportunity to say hello to the artist she replied that she loved his work; I expected nothing less, as she had the air of a professional working diplomat, strikingly beautiful and wearing the buttoned up designer twin set reminiscent of a person who has just delivered the key note address of a Human Resources conference. None of this matters of course, what she is projecting has nothing to do with her practice except for the first time I was left with faint doubts and wondered at whether this calculated risk was the right move. For some of the work there is a hard layer that pushes me away, not because it was challenging, instead it was the opposite, it might be simply a feeling of being overwhelmed by good, decorative taste; I suddenly realize that some of these could be mistaken for the thrift store paintings that are ubiquitous in the more forward thinking lower east side boutiques that my wife occasionally inhabits. But then there is the Hodkinesque title for the show “I want to live in the afternoon of that day” which is easy to see in these lovely paintings, in some you can almost smell, hear and touch the soft breezes of the English countryside in that luscious patch above London where she recently moved to, the reaction of leaving the city to being surrounded by nature is omnipresent in this new work.

I do not know for sure, but I would hazard a guess that Jorge Pardo has a dilemma; having won the hearts of the art world at quite a young age, he went on to make work driven by his our heart and desires, which constitutes largely the making of interiors, architectural space’s and immersive environments which could be generally categorized as a sort of tropical midcentury modernism. He left Cuba as a young boy and moved to Chicago where his father worked in a factory which could have been his fate also, had he not chosen to study art in Los Angeles. The show on view in the Upper East Side is a timely and strategic one; it exists to remind us of his early idea’s formulating at that time, many of which are consistent and inform his work to this day if you choose to look hard enough for them. Central to his practice is the nature of industrialization and marketing of things; objects and people. The show consists largely of prosaic objects, Duchampian, or as the press release argues unconvincingly anti-Duchampian, and if I’m honest not terribly interesting for me now as it’s been done many times before and since; a step ladder, a pair of shoes, found objects. If anything it speaks to the pressure on a young artist attempting to make a name for himself at that time. However he came to many people’s attention when he started to direct his efforts towards spacial design and he gained some notoriety when he built a house along an awkward site in Los Angeles called Sea View Lane. It was this use of space and understanding of how we need to live now, an update on the case study house concepts which originated in that city, that caught my eye. His use of familiar furniture, his handmade designs for overhead lights and plywood all hinted at his 1950’s inner home maker rather than art world radical. One could argue that with this project which hide its self from the neighborhood as it tumbled down many topological layers was the moment his brand was developed (handmade pendant lighting, tiles in warm hues, plywood fittings and midcentury furniture) but was also a subconscious metaphor from a young immigrant; the need for protection from the outside world but with an interior welcoming space to include his adopted circle.

Since then he now features more often in home interior magazines such as Architectural Digest or can be seen in luxurious coffee table books such as Tecoh which I love for all the wrong reasons. He is presented as a somewhat jovial, bearded and portly guy who divides his time between his large, tropical house in Merida, Mexico, on the North Fork of Long Island and in New York City. I give him credit for living in Merida, a city that managed to successfully hide its charms from me several years ago during a day trip in a tiny car from our base in Tulum. The most alarming memory of that day was the return trip as the sun started to fade and predictably we were stopped by a large group of Mexican military guys who were obviously shaking us down, but had not counted on a New York attitude and a pair of exhausted occupants who knew that a long journey was still ahead, so we simply ignored them and drove off, I saw astonished faces in the rear view mirror, hesitating to reach for their weapons and remember my heart thundering for the next few miles. No, this would not be my choice of places to live, but pouring through the glossy magazines and seeing his trademark styling it is very easy to be seduced. He has also applied his standard remedies to a renovated hotel in my favorite small city, Arles in Southern France and touched almost every detail himself, or under his guidance, the slight irony of creating a factory setting himself, echoes of his father’s life, is not lost on us. The industrialized aspect of his work, the volume of his output speaks about the nature of someone who might think of themselves as being both outside the rarified art community but also very conscious of the need to be inside it.

Both artists have at their core a sense of nostalgia and I guess an aspiration that their work is hard to define by an art historical clock. With Pardo’s, his work offers something of the optimism of the nineteen fifties and the possibilities of mass as well as hand production. On Moran’s mind I think, is an English summer’s day, perhaps an imagined prewar late afternoon or simply last year’s glorious sundrenched one, in both cases a country where these are ephemeral moments to be treasured and so uses her art to capture and reminisce about those memories.