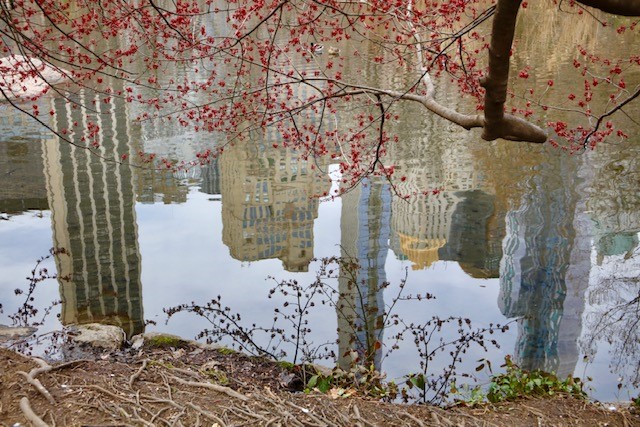 New Yorkers typically like to boast a little about the real and perhaps over-blown disasters the city has endured; the blizzards, 1996 in particular, the hurricanes, the electrical blackouts and the perhaps the only real one, September 11 2001, which also took place cruelly on a perfect blue clear cloudless day such as this. The Coronavirus outbreak feels different, there is a lack of goodwill in the city and we don’t feel drawn together, there is no nodding or kind smiles towards the others on near empty streets, no acknowledging fellow survivors but instead we view each other with suspicion and maintain a safe distance. Worse, there is a perception that those of us out belong to an underclass, we must go out to work rather than doing it from home and so walk furtively with the homeless, but also amongst the care givers, the nurses and doctors. On the streets I am tense if someone gets too close and occupies my space, there is a ballet of wide arc’s to avoid those approaching or to circumnavigate those ahead walking slowly, I imagine a toxicity on their person and fantasize that I can see microscopic viruses like dust around them when they breathe or sneeze; sometimes, ridiculously, I hold my breath if I get too near, as if taking a plunge into the Ocean.

Yesterday in the park I witnessed (or imagined) strange behavior by the dogs, who would normally engage in intimate sensory explorations when they meet, but now remained socially aloof to these delights, mimicking their owners and sparing them at least that further embarrassment. I suspected something else; it was impossible to ignore the elevated, joyous birdsong in the elm trees when I walked through the grove and the excitable birds daring close proximity when I arrived home, fearlessly nesting under air conditioning units nearby. I have certainty that they know more than we do about what is really going on.

As I was walking on the Upper West Side I caught sight of a sun bleached poster of John Lennon in a pharmacy window and realized I was close to the Dakota building where he had lived. I assumed this must have been the place he would come to pick up prescriptions, just an ordinary shopper and then to clear my head of sentiment and sadness thought of his sickly sweet song “Imagine” as an antidote. But he had entered my thoughts again and I remembered that a few days ago, over brunch, we heard his music in the background, reduced to being just pale noise to enhance an atmosphere of nostalgia. This is turn had triggered another recent encounter, seeing on one of the new electronic bill boards in our street, his face with the other three Beatles and the message that in February 1964, seventy three million Americas watched them on the Ed Sullivan show. It’s strange and incongruous how a kid from Liverpool still haunts this corner of the city, I felt again his ghost was trailing me, walking by my side when we pulled away from that strange little park within the park where amateurish versions of his songs are sung to hapless bystanders and enthusiasts. From where I stood you could just make out the outline of the Plaza hotel, where the Beatles stayed on their first night in America, John, George, Paul, Ringo collegiately sharing a suite before the short trip to the theatre, already surrounded by screaming fans and later the indignity of John’s subtitle on the black and white television screens “Sorry Girls, he is married” under the scrutiny of forty percent of the United States; he with the strong face and none of the boyish cuteness of Paul and George. I found myself flirting with guilty misplaced optimism, one that characteristically ignored the hardship of others. John’s naivety was that there would be world peace, mine today was that Cities like New York might empty themselves of hedge fund millionaires and so artists could afford to return, young people would discover the countryside and build communities, planes are grounded and the Earth starts to heal itself, tourism slows to a halt and historic places regain their culture. I walked around the city recklessly, the sun cold and bright, casting shadows as sharp as a blade, amazingly I saw that the local massage spa was open, testing my resolve.

In the blizzard of 1996 I left home early in the morning with the knowledge that snow had fallen deeply and was not about to slow down. I boarded the train in Grand Central destined for Darien Connecticut where I worked at the time.  It was delayed but eventually pulled out slowly deep below the City, past Harlem and then ten minutes later stopped in the shadows of the tall towers of the Bronx projects. The train cars had no heating and I was thankful for my parka, and more for the tiny FM radio I used to carry and prayed for its battery to last. The day dragged on, the coldness intensified and the anger of the passengers was palpable thanks to the lack of information from the conductors helplessly walking through the crippled train. At last some action; an angry commuter walked to the train door, looked down at the deep snow and threw first his briefcase and then himself onto the tracks. Someone said he was crazy, the rail lines held the reputation of danger, the tracks alive with electricity, but he stumbled up from his knees, waded up to a gap he must have seen earlier in the fence and was gone soon into the empty whiteness of the Bronx, a few people cheered for the great escape. But the conductor was furious and said that all the trains couldn’t move now, a rescue train was on its way, comically old fashioned but still functional enough to bring us back to the city.

Hours later I was home again in the warmth of the Loft, recovering from an anguished argument that had my stupidity (for going to the office) at its source and Mary’s worry in its periphery; these were days before cell phones were common and every movement accounted for. If I am honest, I enjoyed the solitary walk through SoHo after getting back downtown, freed from the tyranny of the train and walking down deep pathways cleared despite the heaviness of the snow, feeling a sense of ownership and taking sole possession of the streets if only for a short time. It reminding me of a solitary night walk in the countryside a life time ago when the raucous nocturnal noises told tales of frenzied activity all around; of hunters and the hunted, the starving and the satiated, a short moment in the core of the natural world when you never feel so alive. With September 11 we endured weeks of uncertainty, of future attacks and plane crashes. With this virus we have to admit we are walking in the dark, yet clues have been offered on how it may end as long as we possess the will and discipline of the Chinese and South Koreans who self-quarantined and obeyed. It doesn’t feel very American, this dilemma facing the choice of internment and isolation, the humiliation of not trading or being entertained, just for the sake of a tiny agent, smaller than a human cell.