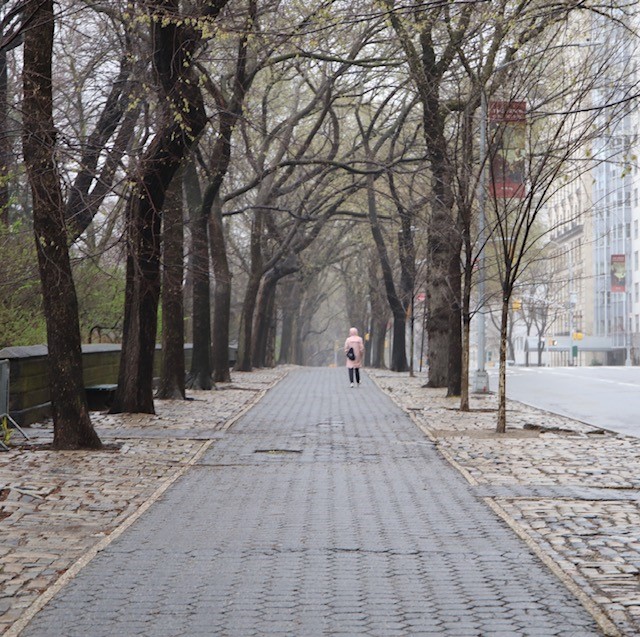 While we are locked down, the homeless have become kings and queens of the city carving out their sidewalk domains, sitting amongst their possessions, shirtless and fierce in the sunshine, grey bearded and laughing at us with our new timidity and anxiety. On a recent walk one started to approach me – his stomach extended, fiery cheeked, the authority of a medieval prince in streets free of the Police – now you know how it feels…. we are the real long term outsiders. I walked home under a cloud of guilt, this lack of empathy and generosity, typically blaming the city for my cold heartedness, someone capable of histrionic sidewalk swerves, theatrically, unnecessarily, walking in the road to keep a cowardly distance. Despite what we hear about the rich leaving town, it has been a leveler for some of on the near empty streets of New York, this is a democratic pandemic.

Now on a dark rainy morning I’m both comforted and disorientated by a deep feeling of nostalgia, forgetting how pleasant a gloomy day can be when you safe and warm inside, the patter from the rain, the freshness of the breeze creeping through open windows and inside, dark interior shadows. Everything about this experience has returned me to childhood partially due to the rigor and tenderness of shared meals cooked at home, evenings structured around television programs, an adolescent absorption in books during long weekends and faint memories of an existence before city life with all it’s grown up distractions.

Recently I have been thinking of an eerie, unforgettable evening I spent as a teenager, which I only recently realized must have been subconsciously triggered by the homeless people I’ve been encountering during occasional evening walks. At my school we had the opportunity to go to an “outward bound” center, a camp inside an old school building in the middle of Wales where we hiked and caved, canoed, climbed and descended small mountains. It wasn’t voluntary, and I’m not sure I enjoyed it all the time. The weather was notoriously cold, the food terrible but there was also the potential for school romances, adolescent mating displays of new found manliness and femininity. We were driven around in old Land Rover Defenders, ex-military and so drafty and uncomfortable, but it was 1976 and the radio was constantly on to the honeyed sound of Fleetwood Mac’s “Rumors”, songs we sang along to and even now possess a gossamer grip on my past so I am afraid of playing them now, fearful towards diminution of the past. On the record itself, which we all bought, there is a photograph of the five band members sitting on a wall in California, dressed as latter day hippies, indifferent to the emerging punk scene and I imagined myself being one of them, the joy of being in a group, being free to play music. Of course I found out later of the turmoil and drugs, disastrous choices, deep divisions and romances going on. I was part of a little group also, there were six of us, three of each gender and we identified as one, not letting anyone inside our tight circle and romances between us were hinted at but never realized. I never understood why but perhaps it was a risk of harming and unsettling this delicate and precious unit that we had formed together. It is a powerful thing, to be part of a group.

One evening some of us were told that we would be bivouacking in a forest, rain was not forecast and so several were selected from the class – perhaps ten or more – and we strode confidently out into the night and through firebreaks and land marks in the forest using flash lights to guide us. These were not ancient woods, the trees were evergreens industrially planted in vast numbers for forestry as farms were not commercially viable; they had a militaristic feel and possessed dark canopies where little grew below. When we found a suitable spot, we made crude bedding in ditches and learnt how to find branches and moss to cover our heads and then tried to fall asleep in the uncomfortable silence of the forest.

After what an hour or so I thought I saw a flash of light but then settled once more. Then another light, this time real followed by alarming sounds in the night – a large branch breaking and short, chilling howls by an unknown but large sounding creature, other noises headed in our direction were now unmistakable. Heartbeat racing, bones frozen, I imagined evil in the soil, in the haunting rustle in the trees above, ghosts in the absent sky. It must have continued for a few minutes, more sudden lights, increasingly human sounds, then suddenly, very close by, laughter and relief; it was only another group that had come to terrify us. They had found our location by the leaders signaling each other….when they asked if any of us were really scared I said I was half way down my sleeping bag and got a big laugh. But I was genuinely, authentically frightened – I sound nieve and a little stupid to admit it, but all senses are heightened in the forest, we hear each sound and imagine the worst. These activities are meant to build confidence in youth, and it’s true, I felt an unprecedented sense of achievement when I woke that morning in the frigid undergrowth in the pale welsh mountain light. It was more about my admitted cowardice, which gained me some credibility, at least with the smart ones in the group, who I knew felt the same way.

I have rarely slept out of doors since then, and only on one occasion on city streets, and in that case it was in Nice in the South of France, and that’s another story. It was enough to alert me to the fears of a city at night, something the New York homeless must deal with at the end of each day, so I should let them growl at us and allow them this temporal superiority.

Another passes with domestic routines and new structures. It’s disheartening to hear there is another four weeks at home, but worse, there is no real end in sight and that this will likely get worse towards the end of the year. It is obvious now that we will not recover the city we knew, perhaps we never will if a vaccine is not developed. New Yorkers have reacted to the lock down in characteristically diverse ways, many left the city to their vacation homes, others stayed and abided strictly to being indoors, in my case I take a walk every few days but what I see leaves little hope; the mask less African American guy standing outside of a chemist store coughing relentlessly into the street, the cashier chatting with her mask pulled down, many families with young children running to the park with abandon to meet their friends. We are not going to get over this soon, I say to myself, like everyone else suddenly an expert on viruses. It is becoming the defining topic of my age – our parents dealt with the fall out of wars – for us it is the spread of viruses, Bird Flu, SARS, Ebola, Mers and AIDS hung over us; an unnatural relationship with wildlife? Or a natural culling of our race, a stark reminder that we don’t all have the right to live forever? Either theory lends itself well to my fatalistic worldview.

Two common themes emerged from this period, the first being the fears of intrusion into our hermetically sealed world where packages and items bought from supermarkets are all viewed with fear; our dentist told Mary that if he gets a delivery he keeps in in the closet for three days before he touches it – so we are dogmatically clean and ape the rituals of orthodox religions and for the first time understand their suspicions. Passed down through generations, this is history repeating itself over centuries. Perhaps they are right, we should step back from progress, from globalization and constant travel, and I had a premonition last year when I was herded through Venice with a mass of Asian tourists that this will all end somehow.

The second is the prevalence of rich dreams that I and others have been experiencing during the lock down. Perhaps it is because of the new, narrow intense lens that we view the world through, being surrounded by our possessions every day. These I have been scrutinizing, brushing off the dust of history and viewing in a new more critical light perhaps with the understanding of the increasing ephemeral bind. Being a frustrated designer, I have always had a dialogue with the things around me, it is important to know who made the things I own and to understand their objectives. For example, the glass and steel table I work off was designed by Gae Aulenti, an Italian architect who also worked on furniture, it was bought in the early 1990’s from a member of the rock band, the B52’s. We have owned this for almost 30 years without knowing much about it, but this lost period of time allowed me to discover that it is called the Gaetano table, made by the Italian company Zanotta around 1973, and the internet helpfully directed me to the Repertorio design book, specifically page 385 for more information, which I have so far resisted to seek out. It is sturdy and handsome, made of quality materials with only the slightest nod decorative and modernist flourishes, a handle bar rubber protects the glass table and there is a dashing red detail taken from car designs of that period.

Across from where I sit is an aluminum chair designed by Ettore Sottsass, another Italian designer, famous for creating the Memphis design group which was the design world’s answer to Punk Rock, where good taste was challenged and rational solutions gleefully dismissed. I’m drawn to his maverick spirit and vision, which seemingly came out of nowhere as well as his ability to look towards the USA for inspiration while so many other Europeans scorned it, Memphis was a wink to the modern US city as well as the ancient one. It seemed exciting to support design objects saddled between the past world and the future one, in a way it is a metaphor for this period where we are facing a historic plague, medieval in scale and in its origin which puts our future in doubt, so we too are straddled between worlds for now, until we assume and have faith that the modern scientists can fix it…….